In The Revolutionists, Lauren Gunderson's 2017 black comedy about four (in)famous women of the French Revolution, comedy meets tragedy in a fictionalized what-if? premise that brings to mind Steve Allen's memorable Meeting of Minds television series and Stephen Sondheim's darkly comedic musical, Assassins. The play is currently being staged through March 15 at the Santa Paula Theater Center.

There are a number of overriding themes in The Revolutionists but the main idea each of the four characters is striving for is their respective legacies and how they will be remembered. The story takes place during the Reign of Terror (1793-94) during the French Revolution when the instability of the French government resulted in revolutionaries being massacred and public executions taking place. As the play opens, French activist Olympe DeGouges struggles against writer's block as she attempts to craft her Declaration of the Rights of Women and the Female Citizen, a work that was 200 years ahead of its time in fighting for equal rights for women. (Staging this play in 2020 was a no-brainer for SPTC, which is devoting its entire season to the works of female playwrights.)

Playing DeGouges is Sarah Boughton, who puts on a "revolutionary" performance that is part Holly Hunter and part Jim Carrey, a combination of feminine self-righteousness and slapsticky over-reactions. One by one, she meets her fellow revolutionaries. Rosie Gordon is Charlotte Corday, who assassinated the fiery radical journalist Jean-Paul Marat by stabbing him in the chest in his bathtub, where he spent most of his time while battling a debilitating skin disease. The unhinged Charlotte is single-minded in her desire to dispose of Marat, a populist who fought for equal rights for the poorest members of society and comes to DeGouges in hopes she could write some last words for her to recite as she is led to the guillotine for her inevitable execution. "Theatre is for rich people and chandeliers," she complains, one of a number of swipes taken by Gunderson at conventional theatre and musicals in the play.

Aileen-Marie Scott plays Marie Antoinette, the doomed Queen of France who was fighting against her reputation as a vacuous bubble head. "The cake thing was taken out of context," she whines. "I need better press." Scott is riotous in the role, especially when she yells out her stage directions.

Juliana Acosta plays Marianne Angelle, a composite of a Caribbean abolitionist who is the only wholly fictional character. She is seeking an end to slavery on her island and approaches DeGouges to help her draft her pamphlets and declarations.

The fun in The Revolutionists is the verbal gymnastics of the often uproarious script, which uses contemporary language (a lot of it profane) to make its points (did Marie Antoinette really use the word "chutzpah"?) All of this is performed under the looming Damocles-like shadow of a guillotine, each character's destiny in Act II.

Smartly and briskly directed by Jessi May Stevenson, The Revolutionists features a stark, obtuse set design fashioned by Gary Richardson. The lavish costumery, which ranges from Corday's peasant outfit to Marie Antoinette's lush dress and towering wig, is by Barbara Pedziwiatr. The sound design includes a stream of appropriate musical references, including such songs as the Beatles' "Paperback Writer," and two by Queen: "Killer Queen" and, after the first execution, "Another One Bites the Dust."

We won't give away any more lines in this outrageous play; it's something you have to see to appreciate. And although we won't say The Revolutionists is a cut above your average play...well, OK, let's say that. Suffice it to say that you will lose your head laughing at this uproarious play.

The Revolutionists plays through March 15 at the Santa Paula Theater Center. For dates and showtimes, see the VC On Stage Calendar. 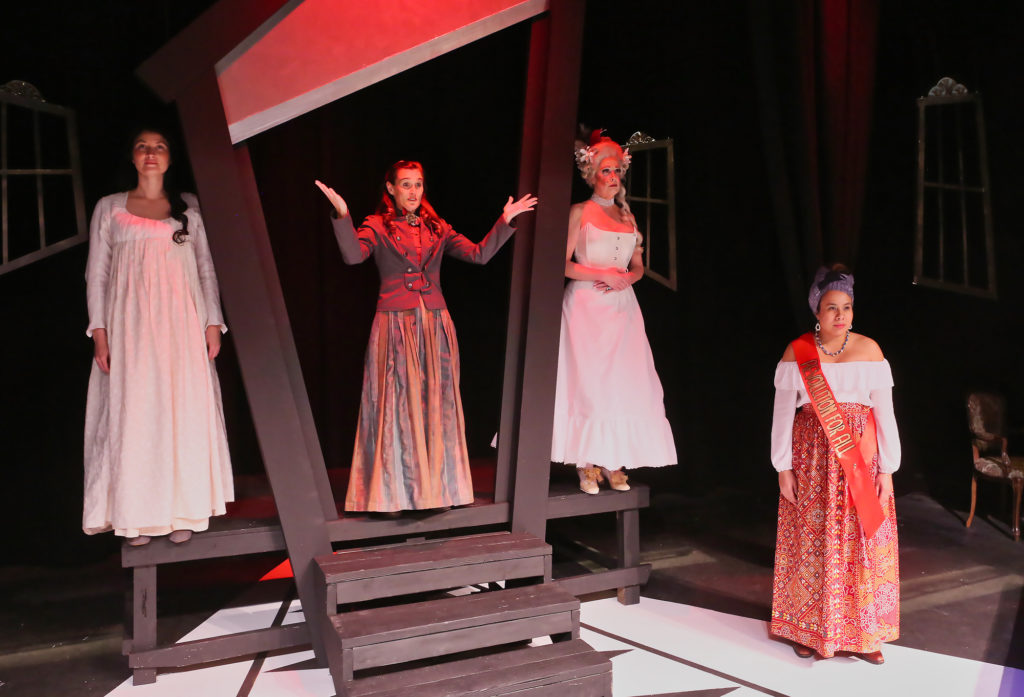 
From This Author Cary Ginell

Introducing Stage Mag, the New BWW Service to Make Your Own Show Program - for Free!